Something to Put Something On

“Something to Put Something On” features Martha Clippinger’s, Russ Havard’s, and Isaac Powell’s explorations involving paintings on objects or object-like forms. In their artwork, the "something" and the “something it is on” become equally important. This exhibition is curated by Emily Sloan. 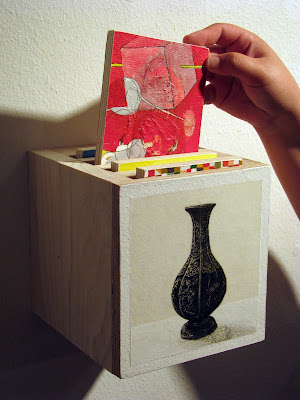 (Above image courtesy of Isaac Powell.)

Russ Havard and Isaac Powell both arrive at their creations from a painting background. Their artworks consist of paintings on elaborately constructed forms. In their writings about their artwork, both artists mention arriving at this physicality of form from physical limitations. Havard's delicate landscapes on intimate, curved forms evolved into their current state after his finding out he had an auto-immune illness, while Powell addresses the challenges of being handicapped with visual problem solving as seen in his finely rendered paintings on forms with shelves, sleeves and propped pieces.

Martha Clippinger addresses the object first and often creates pieces to be experienced in the round. Clippinger utilizes found objects which she then paints. These objects are collected from sites all around her, often initially in the form of scraps and discarded materials which are then given a new life with colors and patterns. She links her attraction
color and pattern to an upbringing surrounded by domestic fabrics such as upholstery and her grandmother’s quilts which adorned every bed in their house. 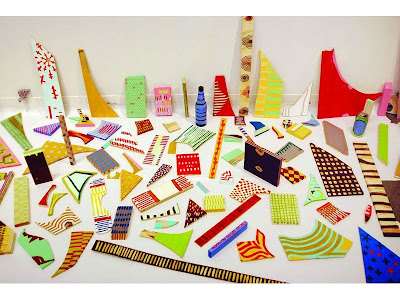 (Above image courtesy of Martha Clippinger.) 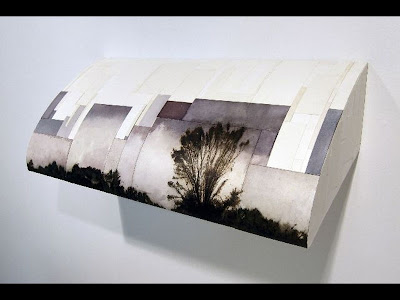 Martha Clippinger grew up in Columbus, Georgia, and it was there that she experienced the art of regional eccentric artists. She left the South to pursue a BA in Art History at Fordham University and later received an MFA in Visual Arts from Mason Gross School of Art, Rutgers University. Since then she has worked as Coordinator of New York Semester on Contemporary Art at Drew University. Recent exhibitions include Jettison: New Ideas in Abstraction at Austin Peay State University in Tennessee and I wanna be somewhere, Daily Operation, New York. She is a recipient of the Marie Walsh Sharpe Studio Fellowship for 2010. Past awards include: the Nadine Goldsmith Artist’s Fellowship at Vermont Studio Center, University Merit Scholar Award and Teaching Fellowship at Rutgers University, and Vasari Lecturer at Fordham University. She currently lives in Ditmas Park, Brooklyn where she is the creator and organizer of the basement gallery space, The Dirty Dirty.

Based out of Lufkin, Texas, Russ Havard is represented by George Billis Gallery in New York, New York and Los Angeles, California. Havard has exhibited at The Museum of East Texas in Lufkin, Texas, the Longview Museum of Fine Art in Longview, Texas, the Art Museum of Southeast Texas in Beaumont, Texas, Blue Star Art Space in San Antonio, Texas, The Jones Center for Contemporary Art in Austin, Texas, and the Bath House Cultural Center in Dallas, Texas. Havard’s artwork has been featured twice in New American Paintings and is in the collections of Time Life Corporation, Washington, D.C., Longview Museum of Fine Art, Longview, TX, and Vector Corporation, Dallas, TX.

Isaac Powell is a recent graduate of the MFA program at Washington State University who now teaches painting and drawing at Eastern Kentucky University. Powell interweaves the themes of life, growth, reproduction, and creativity with those of his own personal history in his still life and landscape depictions. Having been born without a right hand, the flora in his work directly references the body, its appendages and digits. By addressing his own anxieties through the imagery of plant cuttings and graftings, he has developed his own vocabulary for confronting both awkwardness and beauty. Powell feels compelled to displace this physical handicap by creating highly crafted hand made supports and structures for his paintings and drawings.
Posted by Emily Sloan at 9:48 AM