Stephanie Saint Sanchez of La Chicana Laundry Pictures has been awarded a curatorial residency at Gallery 1724. For the residency she is working on: For the Man: The 9 to 5 Show. 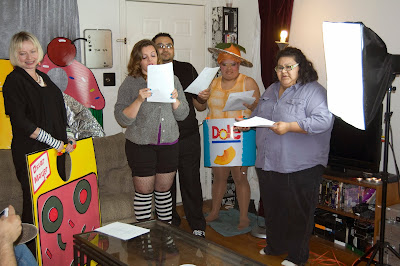 About Stephanie Saint Sanchez:
Raised in Beaumont corrupted in Houston…Stephanie Saint Sanchez is an awesome multi-media artist, movie maker, instigator and it says so right on her business card so it must be true. As founder of La Chicana Laundry Pictures she has made over 25 award winning, genre-bending shorts. She also started the Senorita Cinema film festival the only all Latina Film Festival in Texas.

She is a recipient a (SWAMP) Southwest Alternate Media Project Emerging Filmmakers Fellowship and Lawndale Artist Studio Program. A super fan of movies with an ensemble cast and ties to friends and artists from all disciplines she looks forward to pushing the limits of their collective talents. For more information, please visit: www.lachicanalaundrypictures.com
Posted by Emily Sloan at 11:04 PM